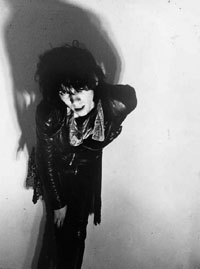 Dave Kusworth and I first met in early 1980. He was playing in a group called the Subterranean Hawks at the time. If there was any justice in the world the Hawks would be one of the most revered bands in world. But this planet is corrupt and the accolades and the laurels they deserved never fell their way.

I'd encountered Hawks' singer and drummer, Stephen Duffy and Dave Twist in the Rough Trade shop on Kensington Church Street where I was working part time-the rest of the time I was playing in Swell Maps. Duffy and Twist had come down to London from their native Birmingham to do the rounds of the record companies-and one of the 'hippest' at this moment was Rough Trade. Unfortunately at this stage in their development Rough Trade had taken on Red Crayola frontman Mayo Thompson as their A&R man. Despite being a very nice chap Mayo didn't really like music and the only bands he had any time for were those who were friends of his.

I'd taken to the Hawks' image from the off and quickly levered a cassette out of them. If I'd been in charge of signing up new acts they would have had a much-deserved deal on the spot. Mayo, however, turned them down flat... Steve, Dave and I exchanged numbers and I agreed to go and see them on the next possible occasion. This took place a week or so later in Kings Heath, Birmingham.

I can't actually remember meeting Kusworth-it seemed from the off as though we'd known each other forever. Through the mists of twenty-three years I remember our first encounter was in Pete King's studio-Pete King was recording / managing the band at the time. I went to the gig with the band and I was bowled over. Their logo in 1980 was 'Five Nineteen Year Old's From Birmingham' and they were some of the coolest nineteen-year old's I'd ever met. They had the character, the poise, the look, the songs and the talent. They had everything save for a parcelful of good luck.

The Subterranean Hawks became the Hawks and persevered for a couple more years. Swell Maps broke up and I embarked on a solo career. At some point during these years Dave and I agreed that if the Hawks ever broke up that we'd get a band together. The Hawks broke up and we did...

But when I turned up at Dave's house, 54 Bryant Street in Birmingham's Winson Green a few days after the Hawks had deceased Dave said, "I've already got a band together with Slim." Slim was the brother of Dave's then wife, Lesley Cartwright. This band became The Rag Dolls and their life paralleled the first incarnation of the Jacobites. I ignored Dave's statement and we set about becoming the Jacobites. We even stole two Rag Dolls' songs, Fortune Of Fame and Teenage Christmas and made them our own. Bass player for The Rag Dolls was Mark Lemon who also played on Jacobites and Robespierre's Velvet Basement. The Rag Dolls were another Kusworth band that never reaped the glories that should have been their due. They played great shows to sell-out crowds in Brum, but apart from that and some wonderful, still unreleased, recordings the world lost out. At some point during the Jacobites' early years Dave even joined the Dogs D'Amour for a Finnish tour and an album, The State We're In. But we carried on regardless.

Dave Kusworth was born in Birmingham, England on March 26 1960 and I was born in London on July 19 1956. We became the Jacobites more by accident than by design. Three and a half years separated us from birth, but musically we had the same roots. Both of us loved the Stones, the Faces, Mick Ronson, Mott The Hoople-you know the kind of stuff.

The first gig we played together was in May 1982 at a pub in Digbeth, Birmingham called The Royal George and we played under the name of 'Six Hip Princes'. A local music paper reviewed the show and wrote, "There were only four of them, they weren't hip and they certainly weren't princes..." Well, some people are hard to please. Kusworth helped out with one of my songs, English Girls, and played on my second solo album, The Bible Belt.

Another year, another album, another label-and we decided to record a joint album. The first song we wrote together was called Silver Street and it ended up on our record. Jacobites had begun life as the third Nikki Sudden solo LP-I did a session with my brother, Epic Soundtracks, and David Barrington and John Cockrill from Swell Maps. We recorded my song, Big Store (orig.), and then I got Dave along to play lead guitar in the song's coda. I suggested to Dave that we make the album a joint project and three sessions later it was finished.

Sitting in the front room at Bryant Street-Dave Twist in control of the artwork-we were trying to come up with a title for the record. I suggested Jacobites-I'd always been fascinated by the Scottish rebels-and that's what ended up being used. The record came out under the title of Nikki Sudden & Dave Kusworth: Jacobites. We became the Jacobites from that moment. The record came out in March 1984.

A couple of months later we went back in the studio to record a 4-track EP. The ensuing 7" was released under the title of Dave's leadoff track, Shame For The Angels. Life was rolling away. Next up was a rather chaotic Italian tour-that-could fill a column by itself-among other things we got rather drunk at a gig in the cellar of a church in some northern Italian city. We did one of the worst, most chaotic gigs of our life and thereby incurred the wrath of the Catholic Church. I think we were banned from the country from that point. I've never played in Italy since... We were younger then...

The Italian jaunt was followed by the Robespierre's Velvet Basement album-released in August 1985. At the beginning of 1986, just a few short months later Dave and I stopped working together-and the band broke up... There was no real reason-Dave said he was going through some emotional problems-but we finished at that moment... Why I'm not too sure-it wasn't that oft-used option, 'musical differences'. We've never really had any musical differences. Both of us carried on touring and recording / releasing records. I went solo, Dave formed The Bounty Hunters. We stayed friends, seeing each other on occasion.

Seven years floated by... When Jacobites and Robespierre's were reissued in 1993 it was suggested that Dave and I get back together and play a handful of shows. We thought it better if we had some new songs to play, rather than just doing the old stuff-after all who wants a mere nostalgia trip? Dave and I sat down one evening and came up with Don't You Ever Leave Me, the song that would be our fourth single. The magic was still there.

Picking up a few Birmingham based friends-Glenn Tranter, Mark Williams and Carl Eugene Picot-who we'd both been playing with, we got the band back together and recorded our third LP, Howling Good Times, which was released in April 1994. We toured Europe to promote the record and during this tour arranged a new record deal and recorded and released the fifth Jacobites' album, Old Scarlett. The LP was released in November 1995 and we toured Europe again. During the Christmas / New Year tour of 95 / 96 we recorded a live album, Kiss Of Life, at a gig in one of our favourite German towns-Hannover. We continued gigging as much as possible, but now we were also working on solo projects as well. I released my patchwork album, Seven Lives Later-recorded with various friends around the world-New York, Moravia, Berlin, Chicago, middle England and the South of France. Dave recorded his much under-noticed LP, Princess Thousand Beauty-a magical work-on a ridiculously miniscule budget in Birmingham. 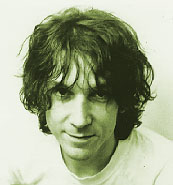 We got the band back together again to record the last Jacobites album too date between 1996 and early 1998. We financed the sessions ourselves-that was one of the reasons it took such a long time to get it finished. My brother, Epic Soundtracks, who played drums on the first two Jacobites' records died in November 1997 and the LP contained our cover versions of two of his songs and one of my songs about him-Elizabethan Balladeer. God Save Us Poor Sinners, one of our personal favourite Jacobites' albums, was dedicated to Epic.

The American release of God Save Us saw Dave and I playing the first ever US Jacobites' gigs. Despite a very strange US bass player the tour went well but this was to be the last time the two of us were on stage together for about five years.

For some reason-I was now living in Germany and Dave was still based in Birmingham-we took a few years off from the band. Since then both of us have continued with our solo careers. I released Red Brocade and my 'best of' set, The Last Bandit. I put together my band, The Last Bandits and got them ready to play my style of music. The way Dave and I play is pretty simple-but playing pure and simple is more difficult to attain than most styles of music. I lost a guitar player and went through a few drummers and bassists before finding the right band.

After playing with John Barry and Stephane Doucerain for a couple of years I was ready to go in the studio to record my new album, Treasure Island, which should be out by the time you read this. Alongside Mick Taylor, Ian McLagan, Darrell Bath and Anthony Thistlethwaite Dave Kusworth is one of the guest musicians.

Dave got back with Dave Twist from the Hawks and together with Glenn Tranter and Justin Farrow he also put together a perfect band, The Tenderhooks. He first tried and then had to lose a bass player. The Tenderhooks have put out four albums over the past years. Their new release, Like 'Wonderland Avenue' In A Cold Climate, is Dave's best work ever.
Dave and I sat down last summer and wrote enough songs for our next album-this will be recorded sometime during this year of our Lord. During our recent Acoustic Christmas European tour stuck way up north in the remote Norwegian town of Trondheim we came up with a new classic Jacobites number, So Far, So Good. This will also feature on the new record.
The Jacobites are Nikki Sudden and Dave Kusworth. The Jacobites will continue as long as we are both alive.

Scene but not Herd #8 The Anti Troppau Council