1. I was wondering about the source of your name. Do you actually feel like "fiery furnaces"? Do you have you got religious / metaphysical concerns? Or are you just kidding?
Kidding? There is no kidding. But we are no religious preoccupations. You see, in English, the plural, "Fiery Furnaces" sound slightly ridiculous, but as you notice, has fire and brimstone-- Old Time Religion-- associations. That combination makes it appropriate for an American Rock group name. In my opinion. Also, the group makes things (music things): therefore a working blast furnace is a good emblem for the group.

2. Some journalists compared you, at the beginning of your career, at least, to the White Stripes. Your ideas remind me of conceptual artists, like Yoko Ono, for instance, or Captain Beefheart and Laurie Anderson at times. Which artists would you cite as inspirations?
Well, those last three you name certainly. But those last three considered as rock artists; which they certainly are. Lick My Decals Off is the greatest Rock record, one must say. And Big Science and Yoko Ono Plastic Ono Band are not far behind, maybe. But I think it is important that artists, for the purposes of their work and for the purposes of talking about their work, be "inspired" by artists and things in the given medium or genre they actually work in. Outside "Inspiration" is not necessarily legitimate. Certainly to speak about.

3. Which was the first record you ever bought, and which was the last?
I can't say, because they weren't rock records. But the first rock record I bought was Van Halen Women and Children first, and the last record was James Brown live in Dallas 1968.

4. In your recordings, the listener can find traces of all kinds of music: from garage and blues, to light pop. Obviously, you believe in creative recycling. But, is there some musical genre that you'll never use in your experimentations?
Well, if you are a rock band we should stay rock music based, at least in my understanding of the term, but I suppose not. I don't know. 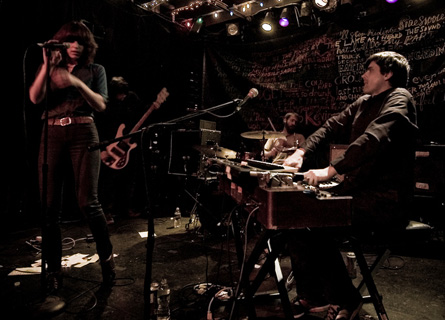 5. Considering that your grandmother Olga Sarantos was a musician and used to direct the Greek Orthodox Church choir, do you feel any connection with Greek culture?
Well, we are half-Greek and grew up in, I think, a typical Greek diaspora environment in Chicago. With people speaking Greek and having some sort of relation to the church. So, in American terms, we grew up as "Greek". But we are the first generation to not speak Greek, unfortunately. Our father is English. But when visiting Greece we always feel very much... at home. But you are familiar with this sort of thing. We have many relatives in Athens and so forth.

6. Your lyrics have an intense stream-of-consciousness style. Yet, on the other hand, they also remind me of children's poetry. Who is your favorite poet or writer?
Children's poetry? Maybe a couple of songs on EP, in which the speaker is a child. Who has one favorite poet? I don't. Do you know the English writer Tony Harrison? He is not my favorite, but he is alive. Because I am a native English speaker, my favorite poet is of course... John Milton.

7. Are you interested in politics? Do you believe that the world can change through elections, or through activism? Or do you feel that it can't and shouldn't change at all?
How short is this answer meant to be? Elections or activism? One needs a dual strategy, obviously. Politics is often the activity of attempted to prevent the worst --certainly in the USA-- so one needs to participate energetically in elections, at this time, I think. That is certainly the case in the US, where the political situation is so dire that activism is nearly impossible. And the effects of a even-more-right-wing government so dramatic and catastrophic (especially in the country itself). But one must also pursue ones actual, as opposed to merely temporary and pragmatic, political and policy convictions through activism, no?

8. Your songs sometimes tell little stories that would be ideal for film adaptation - e.g. "My dog was lost but now he's found." Who is your favorite filmmaker, and who would you choose to make your next video clip?
I like Powell and Pressburger. I would like a movie such as their "Tales of Hoffmann".

9. If you learned that a tribute record of your songs was going to be made, which artists would you like to see in it - apart from Radiohead, obviously!
Of course, Beethoven playing behind Mavis Staples.

10. What do you know about Greek music?
I know that the Greek pop-art-vernacular music of the last 100 years is fully as rich, is fully the rival of the great African and Caribbean pop musics of the same time. Those are the highest quality strains are they not? Along with the American (and British) music, obviously, which is so overwhelming, in a good and bad sense. I put the Brazilian music a touch lower than those four. --But that is just my opinion.

11. Considering the unexpected nature of your performances, what should the fans expect to see in your March 2 Athens concert?
I can't tell you! We think it's a great honor to play in Athens, certainly.

Thank you very much for your questions and interest in the band.

David Crosby I was an asshole

Broadcast Through The Gates Of Yesterday