You Cut Me Deep

"The songs were really important, even more than image or attitude in some ways" - Jim Shepherd (The Jasmine Minks) 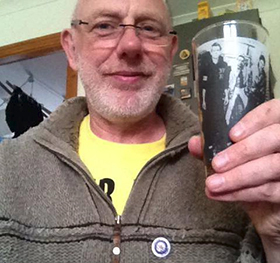 Is it true that the first bands that signed to Creation Records were regulars at the Living Room? Did you use to party there?

A lot of bands played at the Living Room apart from The Jasmine Minks, including Primal Scream, The Loft, Biff Bang Pow! and The Legend, even a Christmas appearance by Revolving Paint Dream. We did have some Christmas parties there which were fun and included some loud jams of Sister Ray and similar classic songs.

Creation Records is considered to have been as one of the true independent labels. You were a part of it from its beginning and one of its most important bands that defined its sound. What do you think were the crucial elements that established its reputation as truly independent?

Creation seemed to catch a mood for guitar pop which had an alternative feel and tried to avoid that 80's production sound. Joe Foster had a great way of working with bands which was closer to Phil Spector than it was to the, seemingly, omnipresent sound of Trevor Horn. Joe gave us an edge in the sound, but it was Alan McGee's fast talking and anti-hippy talk which caught the mood with his fanzine, Communication Blur, and later with his energy in tirelessly promoting Creation bands.

How did it feel like to record with Creation Records back then?

Independent labels were on a different planet then. Independent distributors fed into independent record shops, whereas the major labels fed into the large record shops and there was not much mixing between the two. We did feel that we were part of a bigger thing than just an independent record label when we recorded. Although The Jasmine Minks were a unit, we did record with Joe Foster and had Dave Musker from The Television Personalities playing organ for us. Alan McGee was in the recording studio with us giving us encouragement. It was a buzz and we did feel that they were special records, both in attitude and in the sound.

Apart from the books, "Upside Down" paid a great tribute to the label and its sound. Now, Creation Artifact focuses on the early years of the label. What can you recall from that time?

The early years were the best. It was a struggle getting an audience at times, although we quickly got a good bit of press in the weekly music papers. We were all poor, we had very little equipment and transporting the gear around the various venues around the UK was difficult. There was lots of sitting in the back of dark vans and cramped journeys. But The Living Room was a great meeting place and a weekly chance to meet up with the other groups and socialise. We dressed in pointy shoes and Mod-style shirts and looked different to the main 80's styles. The Living Room was very basic with a small PA and no stage lighting, in fact, no stage! It was quaint in a way, but invigorating and new in another as we took the energy of the 60's and pushed it to the 80's.

How can you define the sound that is fully presented in Creation Artifact?

Do you consider that Creation Records' sound was a manifestation against synth pop and the dark 80's sound?

Definitely. Dark, gothy music and stadium rock was off the menu! We wanted to communicate and to invigorate. We wanted to change our sets regularly to keep ourselves sharp and our audiences on their toes. We could descend into drunken riots at times and wimpish pop at others, depending on the circumstances.

Alan McGee has stated that "the Sony years was the beginning of the end of the real Creation Records". Do you think that the early sound (the sound of the 80's), that is fully presented in Creation Artifact, is better than this of the 90's and why?

I enjoyed the 90's as a fan, but the 80's as a performer more. We were all a bit rough and cheap in the 80's but in some ways that has a cool sound too. Once you start aiming at the radio for your press, the production levels had to go up and there are good and bad points to that! The Jasmine Minks did not record for Creation in the 90's (although we did join up with Alan McGee again on his Poptones label) so I can't speak too much about Creation then. It seemed less personal when I went to the offices in Camden Town in the 90's and there was a more business-like atmosphere. I didn't like that as much, but the label was huge by then... 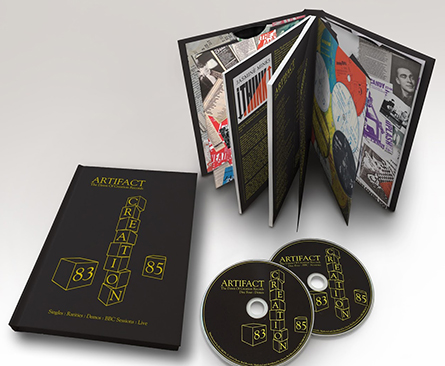 Creation Artifact "The Dawn of Creation Records 1983-1985" contains music performed by many really great bands. Which of them do you like the most?

Primal Scream are one of my favourite bands of all time. Anything from All Fall Down, through to their most recent stuff still turns me on. I love Pete Astor as a songwriter, I love the mystery of Andrew Innes as Revolving Paint Dream too. Biff Bang Pow! had some great singles and it's a shame they never get talked about much now.

Although Creation Records' releases were critically acclaimed, not so many of them became major commercial hits. Why was that?

Radio 1 would not have touched the early recordings as they were too raw. Nowadays, they would probably fit in nicely on X-FM or Radio 6, or even Radio 1, here in the UK. But they had an odd aesthetic, with quirky mixes. There were no 'radio' singers on the label then (rock or soul) and that probably made it difficult to appeal to a big audience. We mostly sung in that unaffected, non-American style which again, the radio stations didn't like!

As years go by the sound of Creation Records never seems to be obsolete; on the contrary, it is still fresh and powerful. How was such a thing achieved?

The songs were really important, even more than image or attitude in some ways. The early singles and the recordings were done quickly, which managed to capture the urgency of the groups. People must still be able to hear that...