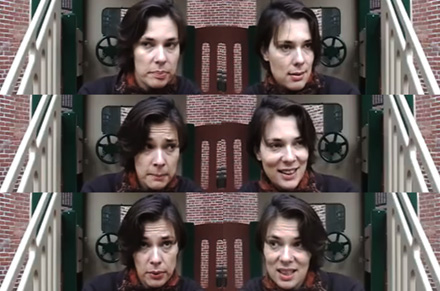 1. Alone at last? Monade was a solo project to Stereolab and now you chose an even more independent form, a real "monade" etymologically speaking. Eventually, are there things that one cannot share in a band and simply must do alone?

The soul of the Monade project will never cease to exist; although I now will perform and make records under my name. The fact of going truly solo for the coming live shows is a transition. I want to be a strong performer and for that I feel that I need to work and go alone for a while, and not rely or "hide" on or behind anyone!

Really my aim is to play in a band and share the adventures of being on the road together, performing together, meeting people together. There is a strong human adventure at stake which I have experienced with Monade and want to experience again. But it is true that the time is now to get stronger alone.

It is interesting how things happen organically and how Monade existed in rapport to Stereolab, and now that Stereolab is having a big rest I naturally artistically become another entity, I become me! A real monade...

You have to ask Tim this question. I will always be happy to sing Tim's songs. 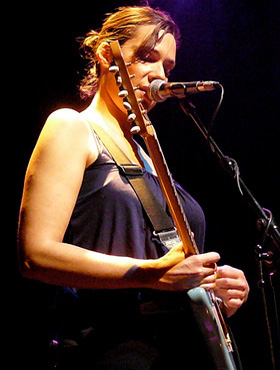 3. What's the idea and the creative motive behind this acoustic turn? Back to the "roots" in an overproduced world?

I have been feeling the need to look for what is essential in my music and not overload and layer it. The new album which I just finished mixing last week was entirely made with this principle in mind. Still there are layers and it isn't a pure Tibetan bowl sound, but it was something I wanted to tend to. And yes maybe it is a reaction to an ever increasingly busy world. A natural need for stillness!

4. You have worked, and collaborated with many different artists. Is there a collaboration you distinguish for any particular reason?

All collaborations have been a stone in building my confidence and joy in creating something. I have particularly enjoyed the performances with Mouse on Mars. They were largely improvised and evolved every night with every show. I realise that improvisation is the most fun of all! I truly celebrate and honor all the collaborations that I have done so far and look forward to any more coming.

5. By the way, "Sixteen Haikus and other stories", the record of Sigmatropic in which you've participated in the past, has been voted as one of the best Greek LPs of the decade. Do you remember something special from this project?

Congratulations to Sigmatropic and the 16 Haikus!! Yes I remember working out a little melody for this project. It was one of the 1st times I was asked to participate to someone else's work. Our friend here in London Theodore was the messenger to this affair. It was a fine little adventure! Really glad the record is gaining all this recognition. I didn't realise at the time who George Seferis was and have discovered him since... what a great poet.

It is difficult to answer this question. Generally I can live by all the decisions I have taken, endorse responsibility and handle their consequences. I don't think there is a right or wrong way to do things. It is just a process of going through life having to make choices at every step of the way. I guess the trick is to make choices that are lit by as much consciousness as possible so as not to fall into traps, although when we do fall into one we are put in a situation where we have to learn to get out of it and in the best of cases lean not to fall into yet another trap. So even if it hurts to fall into a trap, there is a chance to learn here for the future and be all the wiser for it. 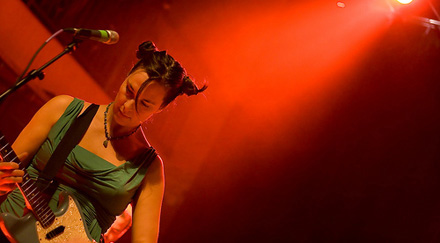 7. What's the best and the worst thing you've ever read about your music?

The best and funniest thing I read about my compositions is that they are of the purest jazz form!

The worse thing is that some journalists are tempted to amalgamate my work with the lab's and compare the two. Because they have expectations -which is quite natural..-, they hear my music as a stripped down version of the lab, and not as what it is. ...

8. What comes first? The lyrics or the music?
I prefer when the lyrics come first. But have taken bad habits with Tim, where the music always came 1st. But I think there is more truth and organicity when the lyric is 1st, only because I seek less control and let more the song find its shape and way as it wants and dictates.

9. What's the meaning of improvisation and experimentation in music from your point of view? Generally speaking, does it sometimes become "an end in itself", a way to sound original and different in a quite competitive musical environment?

Tha'ts a big question and I realise I have already partly answered it earlier. I don't know what improvisation and experimentation means for other artists, but for me art is a place of complete freedom where anything, any topic, idea or emotion can be explored; it is a safe and sacred space where you can do what you want. Improvisation is the moment where I can let go of my wanting to control whatever situation is at hand and let another part of me express itself. It is liberating and interesting and yes, because it is "uncontrolled" by the higher commander quality control in chief it may be given a chance to sound original and different -which doesn't necessarily mean it will sound good! It is liberating to be able to let go of certain criteria -like the fact that it must sound in tune, in time, clear, coherent, commercial, seductive, interesting and whatever expectations people may have before they hear a track- and express something that need to let out in a more raw form. 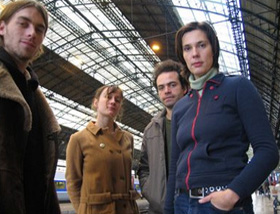 10. Was there a record in your life that in some way changed your view of music or life?

Yes, the 1st Smiths lp was the one where I realised I wanted to be a singer and actively do music in my life. Of course besides that I was very influenced by the era that came just after punk had kicked some of the youth and society up the back side. Even in France we realised that if we wanted something we had to go out and do/get it. It was a very inspiring and exciting time where lots of good music came out; it was vital and urgent music, not worried about being commercial -and some of it did happen to become commercial, but they shaped what was commercial not the other way around.

11. Let us have a secret look in your room... What's that CD over there you bought today? And that interesting book you read these days?

I play the new Richard Swift Cd quite a bit, and those Erkin Koray LPs -I think he is Turkish, he made music in the 70s, some of his stuff is just pure hybrid bliss. I love it!

i am reading several books. I finally got round to pulling out Sylvia Plath's Bell Jar out of my bibliotheque. As well as a medical book "Dis moi ou tu as mal, je te dirais pourquoi", looking at why we have the aches and illnesses we have in a wholistic way. And finally a situation arised recently which made me very scared and I was told to read "Feel the fear and do it anyway", not very well written but maybe it will be interesting?

Coming to think of it, I think I want to re-read Cornelius Castoriadis "l'Institution Imaginaire de la Societ?".

12. You are French, lived in the US and Great Britain, in your music one can trace influences from brit pop, French chanson, German kraut. Do you really feel part of a certain tradition?

You mean a European tradition? Yes, for sure.

13. Economic crisis created by the global elite (and should you be Greek, it would also be the local elite) calls for a rescue plan asking the people to save the markets. Socialisme Ou Barbarie, is it Barbarie eventually?

Yes, alas it feels like Barbarie has an ascending position at the moment. But of course it is up to us to make it shift. I can't believe we are not taking the streets as the people who are supposed to be looking after the good of all -so they say- are really working in the interest of big business and putting money at the centre of their preoccupations. And just as it is more and more obvious that this is a fact, we are asked to pay for the mistakes of those who have created an economical and financial mess. Revolution anyone!?!

14. In this context, can music, art generally, change the world? Or it can just only provide the soundtrack of the revolution?

Well, anything can and does change the world. I see the world as a monade! Anything affects the whole. So any action will have an effect. Art has traditionally held an heralding place in society. The muse that inspires and reveals potentialities, what can become. As well as being a mirror to it and why not being a soundtrack to some more radical action too. It can work in different ways. I think what we lack is the nerve to do things and take control of the situation, decide consciously how and with which values the world is now run. Put human life back to the centre of importance, bring value back to the work we do, to how precious and privileged we are to be here, cultivate notions of love rather than the ones of fear that are very efficiently cultivated by the media and powers that be. And yes, let music and art participate in all of this!

No, i have never been on soul seek and have never heard of torrents. I know some people who do, but it never seems to really bring about a real long term solution to their needs..

16. So, are you going to play songs in an acoustic kind of way or should we put on our dancing shoes as well?

The songs will be played on an electric guitar and I will see on the night what happens in terms of tempo, let's leave it open. Do bring your dancing shoes tho' cause we don't want to miss an opportunity to express ourselves freely! Dancing is the best!

Trans-Europe Mixtape: From city to city

Statistical reminder of a world that doesn't care...